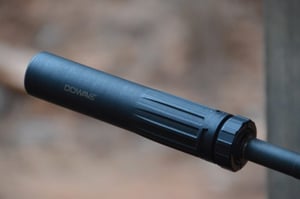 While 2017 saw massive strides in metal 3D printing technology, 2018 shaped up to be the year metal 3D printing made commercial breakthroughs, especially in the firearms sector. With the huge advantage presented by metal 3D printing in terms of strength and durability, the firearms world embracing this additive manufacturing technique is only natural. There have been a few success stories so far in this space, from suppressors to 1911-style pistols, and we will undoubtedly see many more.

The most obvious indicator of the technology maturing has been in the form of the DD Wave Suppressor by top-tier firearms manufacturer Daniel Defense. With their first outing into the suppressor world, DD chose to go the additive manufacturing route as opposed to more traditional manufacturing practices, which with suppressors involves a lot of milling and welding, leading to potential flaws and weaknesses in the finished product. DD chose to use direct metal laser sintering, aka DMLS, to produce their new suppressor. In this process, a thin layer of powdered metal (inconel) is deposited, then a powerful laser sinters specific parts of it to the previous layer. Thousands of layers later and the result is a single, homogeneous piece of metal similar to what you’d end up with via investment casting. The end result is an amazingly strong product, which in the case of a suppressor, is critical. A sound suppressor for a firearm must trap and redirect the gases and force of an explosion, therefore any flaw in the product could prove to be a catastrophic, and potentially injurious one. With no traditional welds and joins to worry about, the DD Wave is an exceptionally strong and safe product as compared to its competition.

Prior to the leap made by Daniel Defense with its DD Wave suppressor, metal 3D printing within the firearms space wasn't standing still. Solid Concepts, in partnership with industry professional Eric Mutchler, had introduced a prototype 1911-pattern pistol, chambered in the venerable .45 ACP cartridge, entirely produced using DMLS technology. From trigger, to slide, to barrel, the firearm was entirely produced using 3D printing. Though the 1911 design itself is over a century old, it is still regarded as a benchmark for firearms design, and represented an appropriate place to start for this application. The initial tests of the firearm proved reliable over a six-hundred round course of fire, with the prototype itself having fired over five thousand rounds since then, which is more than most pistols outside of competitive and specific combat uses will ever fire. One can imagine a DMLS 1911 mated to a DMLS suppressor soon.

Simple components for firearms are an obvious candidate for metal 3D printing and additive manufacturing technology. One prime example is the Auxetic Muzzle Brake, by Sintercore. A muzzle brake assists with recoil management, enabling the operator of a firearm to keep on target during a course of fire by counteracting the recoil from the muzzle blast. As it is essentially redirecting an explosion, a muzzle brake needs to be a strong and perfectly manufactured part. The Auxetik brake took full advantage of DMLS technology, the result being an incredibly strong and wear-resistant part. The U.S. Special Operations Command has tested this product using fully-automatic weapons platforms, subjecting it to hundreds of rounds of testing in a single burst of fire, and the Auxetik passed with flying colors. A civilian purchaser of the Auxetik reported flawless operation after one year and over 8,000 rounds of semi-automatic fire, which subjected the brake to cycles of heating and cooling, along with other environmental factors.

One of the latest accessories to incorporate metal additive manufacturing processes is the NERO 556 muzzle device from Walker Defense Research out of Mesa, Arizona. Looking like something out of a retro-futuristic science fiction film, the NERO's innovative design has already made waves in the firearms industry, with it's ability to impressively mitigate felt recoil, even on a fully-automatic carbine platform. Already with this use case in mind, several unnamed three-letter agencies have expressed an interest in this device for their rifles. Having made a splash at SHOT 2018, Walker already is hinting at some truly innovative 3D-printed components for SHOT 2019.

3DEO is a parts supplier, and works with many defense and military manufacturers. If you'd like to learn more about how to work with 3DEO, contact the company.  Or, you can submit a request for a quote by clicking the button below.