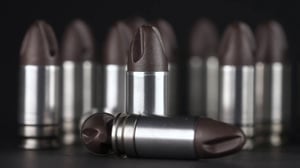 In the firearms community, 3D printing is a topic of hot conversation. Firearms enthusiasts frequently pitch the benefits of additive manufacturing, which allows firms both large and small to rapidly prototype new components and pieces, and bring them to market faster. Hobbyists have been watching the pricing of AM equipment fall, some hoping that they can one day print complete firearms at home. As the saying goes, they want to "be able to produce AR-15s at home using 3D printers they paid for in Bitcoin..."

Believe it or not, it's already possible to produce complete firearms using AM techniques. Advances in metallurgical and laser sintering (DMLS) techniques have led to more and more firearms parts being fabricated in this fashion, with even high-stress components such as suppressors being completely fabricated using AM. For reference, a suppressor (aka 'silencer') needs to contain and direct incredible forces to be effective. Metal 3D-printed components have a number of key advantages, such as not needing to be welded and new design freedom — that have great potential in the defense and firearms industry.

Of course, it's possible to use AM to fabricate the entire weapon, with a suppressor, other accessories, and even the optics. With that being said, a gun is nothing but a fancy over-sized paperweight without one critical thing — ammunition.

Since time immemorial, the hallmark of the true marksman has been the custom manufacture of ammunition. Home-based reloaders spend hours poring over ballistic data, powder formulations, chronograph readouts, and other information to craft a perfect load that can strike a target with sub-minute-of-arc accuracy from a thousand meters away (or more). However, these reloaders have always been at the mercy of outside manufacturers. Having been around for thousands of years, formulating gunpowder is no state secret. The true precision work of producing primers, casings aka 'brass', and the projectile is where the real work happens. Until now, that has been out of reach for 99.9 percent of the reloaders out there.

With the levels of precision available with today's metal AM technology, especially 3DEO's Intelligent Layering® process, it will soon be possible to produce projectiles and casings in small batches to the exacting specifications of precision and competition shooters. With AM, an innovative shooter with a new idea for an efficient and effective projectile doesn't need to wait for one of the bigger bullet manufacturers to evaluate their idea for production. In the near future, the shooter can simply 3D print their projectile concept, load it up, and test it immediately. Metal 3D printing condenses the cycles so the time required to produce and test new concepts is dramatically reduced.

Primers Made with Metal 3D Printing?

Similar processes can be applied for casings, with one Italian firm exploring an idea where the casing is printed with an integral primer, which, if successful, will actually offer a huge safety benefit to the reloading community. Typically, the primer is the most volatile part of a munition, as the primer can accidentally be triggered with too much force. As a result, reloaders have to take great care handling them. An integral primer added via AM techniques is inherently safer as it is built into the cartridge itself.

Even without the primer innovation, additive manufacturing is closer to producing projectiles and casing individually and in quantity. The AM industry is focused on getting to production quantities by increasing throughput, which is exciting for the defense industry.

The manufacturing gap is closing once again with democratizing technologies like metal 3D printing. This transfers the power of innovation and development into the hands of the everyday people who are often the most enthusiastic about the product.