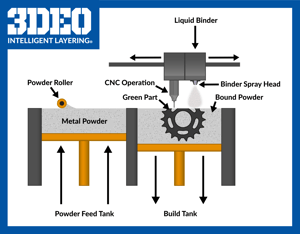 The first metal AM technology competitive with traditional manufacturing

It's a new additive manufacturing process developed by 3DEO that enables medium-to-high volume metal part production. The process begins by spreading a thin layer of metal powder onto a build tray, and then uses a spray system to apply binder over the entire layer. A micro end mill is then used to cut into the bound powder at the perimeter of all layer features. From then on, the process is a layer-by-layer CNC operation until a precision green part is created. The green part is then sintered in a furnace to achieve final part density of 99% or greater. Intelligent Layering® unlocks the potential for high volume metal AM with a highly repeatable process that produces low-cost metal parts.

Intelligent Layering® was specifically designed to tackle the cost and low throughput problems typically associated with metal additive manufacturing. The result is an ultra-low-cost machine that virtually eliminates machine amortization as a part cost driver. It also attacks cost through the use of commodity metal powders, which are five to ten times less costly than powders used in PBF. This process addresses both the high-cost and low throughput challenges of metal additive manufacturing. Also, there are no degrading processes in Intelligent Layering® so first part is exactly the same as the 10,000th. As a result of the tightly packed fine powder, at ~100 Ra, 3DEO has one of the best surfaces in all of metal additive manufacturing in the as-sintered state.

Disadvantages of Bind-and-Sinter Metal AM

Similar to other bind-and-sinter technologies such as binder jetting, Intelligent Layering® is limited by the shrinkage factor that happens in the sintering cycle. When metal powder is bulk sintered in a furnace, there is a certain amount of shrinkage that takes place as the voids between metal particles disappear and the particles fuse together. This shrinkage is predictable and can be dialed in for each part geometry that is encountered, but it is certainly a disadvantage of the process.

Intelligent Layering® was created to bring metal additive manufacturing into the world of volume production. The technology is a complement rather than a competitor to PBF since it is best used in higher volume applications, but is not well-suited for one-off production like PBF. The applications of this technology are vast and include many of the markets currently being served by metal injection molding including medical and dental applications, firearms components, precision gears, and many other complex metal parts of limited size. The future of Intelligent Layering® lies in applications such as medical components and other industries where high volumes of complex metal parts are required on-demand and at competitive pricing.

If you're interested in working with 3DEO to buy parts that are cost-competitive with CNC, MIM, and investment casting, contact us by email at info@3deo.co or by phone at (844) 496-3825.

You may submit a request for a quotation below.